206 ACU is very fortunate to be supported in our activities by the following community organisations. Our unit is proud to be associated with these clubs and works to forge greater ties through joint activities on Anzac Memorial Services, Remembrance Day, Live Fire exercises as well as our own Annual Ceremonial Parade.

Every year the unit supports Mosman RSL by participating in their Anzac Memorial and Remembrance Day Services. The unit has been asked to provide flag orderlies, prayer readers, guard of honour and/or Catafalque Party during past services. The unit also has representatives from the club as distinguished guests to our annual Ceremonial Parade where they often present awards.

Another important aspect of our association with the club is that cadets have the opportunity to talk to real veterans and ex-servicemen and women from the ADF. This contact is critical to ensure the Anzac Spirit lives on in the youth of today.

Club meets meets on the second Monday of each month (except January) in the Club’s Auditorium from 1830h. New members and visiting Sub-Branch members especially welcome. Refreshments are served at the conclusion of the meeting. 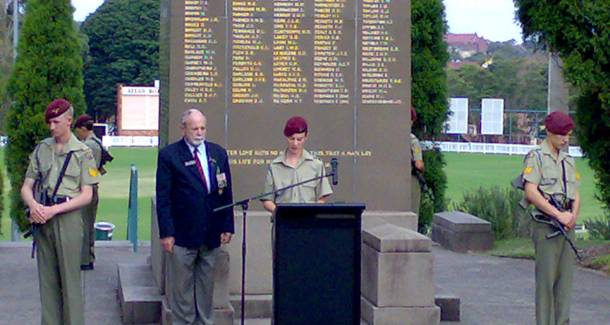 Every year the unit supports Kirribilli RSL by participating in their Anzac Memorial Service. Our aim at the service is to give cadets the opportunity to march with the veterans, assist as flag orderlies as well as Catafalque Party. The unit also has representatives from the club at our Ceremonial Parade as distinguished guests where they often present an award.

Another important aspect of our association with the club is that cadets have the opportunity to talk to real veterans and ex-servicemen and women of the ADF. This contact is critical to ensure the Anzac Spirit lives on in the youth of today. 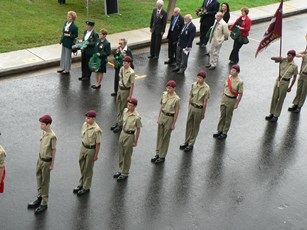 For the past 5yrs the Hornsby RSL Pipe Band have provided the unit with fantastic support as our official band at the end of year Ceremonial Parade. Every cadet or soldier who has ever marched knows the difference a great marching band can make to a whole parade. The band's participation in our Ceremonial Parades has helped turn them from great to excellent!

Always resplendent in the red of the MacLaine of Lochbuie tartan, the Hornsby RSL Pipe Band was originally formed in 1961.

The band is active at civic and charitable functions in Hornsby and surrounding districts. April is always our busiest month playing at The “Bundanoon is Brigadoon” Highland Gathering and the ANZAC Day Parade in Sydney as well as ANZAC commemoration services at Kirribilli and Hornsby. Some of the other annual events we attend are the Kenthurst Orange Blossom Parade and the Crowle Foundation Fete at Ryde and Relay for Life at Hornsby. Members of our band have also been to Pipefest Edinburgh in 2005, Shanghai in 2006 and plan to go to Halifax (Canada) in 2007. We also form a combined band with Singleton on Hunter Pipes and Drums for events such as the Aberdeen and Toukley Highland Gatherings and the Scottish Week Parade in Sydney.

We are in the planning stages for a trip to Scotland in 2008 together with Singleton - a combined sightseeing tour and also to play at some highland gatherings.

Practice is Wednesday night beginning at 7:30pm at the Hornsby War Memorial Hall next to the RSL Club. We provide tuition for members and anyone interested in learning to play bagpipes or drums. 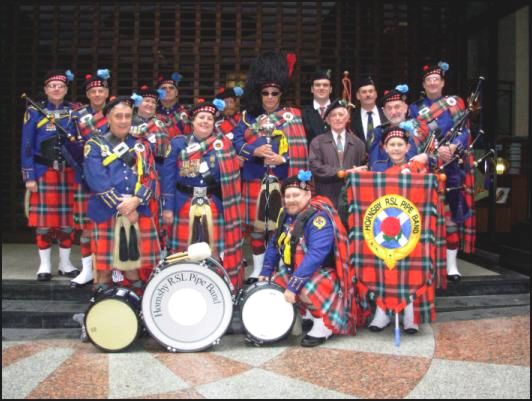 This training teaches the cadets important safety procedures and safe weapon handling techniques that will be used on formal cadet live fire exercises on Annual Camp.

In addition, we use the results of the target shooting to determine our annual Unit Marksman. In 2009 the Club very kindly donated a new trophy and it was presented on our Annual Ceremonial Parade in December for the first time by the Club President, Mr Hoon.

With the assistance of the President of Mosman RSL (Mr Henderson) and staff from the Sydney Harbour Federation Trust for the first time in 2009 we were able to parade on the historic parade ground at Georges Heights.